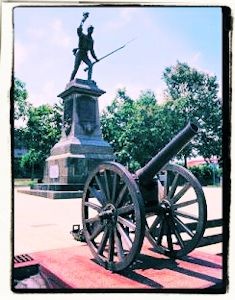 As with every country’s heroes, facts, myths, legends and truth blend together and form themseives into a folklore. The story, as it is taught to Tico school children, is as follows: Juan Santamaría, a seventeen year oíd drummer boy from Alajuela, single handedly turned back an invasión of Costa Rica by burning down a fort full of enemy solders and in the process lost his life. Now, what parts of this story are fact and which are fantasy is open to conjecture.

What do we really know for sure?

William Walker, an adventurer and all around scalawag, forcefully took over Nicaragua in June of 1855. His ultimate goal was the formation of a Central American territory patterned after the slave states of the southern United States.

The then Costa Rican president, Juan Rafael Mora, organized a large group of citizens into a militia, as the country had no standing army at the time. Two battles occurred in February of 1856, one in the Guanacaste región of Costa Rica and the other in the Nicaraguan town of Rivas. William Walker’s troops were defeated and Costa Rica was saved from invasión.

What are we pretty sure that we know?

Among those fighting at the time was a young boy from Alajuela named Juan Santamaría, who later died from injuries incurred during that last battle at Rivas. The fort where Walkers troops were held up, was burned down, ending the conflict with the Costa Ricans victorious. William Waiker himself was not at either of the battles and was at the time in Managua, recovering from malaria.

What we pretty much don’t know

Who Was Juan Santamaría?
What did he look like? Since he was a poor young peasant, there are no pictures of him.
Was he really the one who set fire to the building in Rivas?
Was he really a drummer boy?
How old was he?
How many Costa Ricans made up the hastily put together defense force?
How many of William Walker’s solders
where in the building that burnt down?

The main reason for so much confusión is that at the time of the conflict other factors overshadowed it. In particular, a cholera epidemic, who’s rapid spread in Costa Rica many blamed at the time on the returning army. This outbreak was a catastrophe to the country and región, claiming nearly 1/3 of it’s total population.

It was not until nearly fifty years later that Santamaría and the victory over Walker was truly embraced by the Costa Rican people. During one particular presidential campaign, a candidate from Alajuela brought forth Juan Santamaría’s ñame in an effortto stir national pride. It worked, and the cali was taken up by the government to find out about their national hero. The only problem was, everybody who had fought in the actual battle was dead, there were no eyewitnesses. In the end it didn’t matter because the story was already so ingrained into the culture as to be fait accompli.

So, if you have not noticed that of all the numerous statues of Juan Santamaría in the country, no two are alike? Now you know. In the end, what matters is that Juan Santamaría is an example of courage, fidelity, loyalty and devotion to ones country and people.