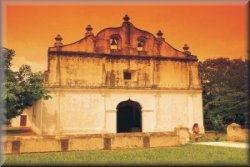 At the time of its discovery. America’s territory was populated by different groups of native peoples, whose population is calculated to have been around 400.000 studs. These were divided into kingdoms, grouped basically into Itvo great areas of culturul influence. On one side there was «Meso-America» (Mayans and Aztec), and on the other, the South American cultures.

Costa Rica was characterized by being the point where the two cultural traditions came together. This made our country the crossroads of culture and commerce, which explains the great cultural variety and richness to be found in such a small territorial space.

Another of Costa Rica’s characteristics is the relatively small size of its infrastructures. This is due to the fact that the territory did not belong directly to any of the major kingdoms. One could say that it was an unconquered land, as far as the great indigenous kingdoms are concerned. Its population was distributed in small hamlets or tribes, while the region of Meso-American influence was a bit more stratified with well-established settlements and with important population concentrations (several hundreds).

In the Caribbean region, there were small and very disperse settlements in groups of small membership, whose numbers did not exceed the two digits. The people in this region were quite belligerent and thus, were never conquered by the Spaniards. In what is known today as the Central Valley, there were well defined and stratified tribes, but they were also sparsely populated.

In his fourth and last trip to the New World, on the 18th of September of 1502, Christopher Columbus discovered our country’s Eastern Coast. In this trip, he set anchor in front of an island that the natives called Quiribriand which he named La Huerta (presently Isla Uvita).

In what today is the city of Limón, in front of the Island of Quiribrí, where Colon set anchor, there was a native village, called Cariay o Queria.

In 1519, Juan de Castañeda and Hernán Ponce de León, followed the Western seaboard of our country, from what is today Punta Burica, to the Gulf of Nicoya, discovering, among others, the gulf of Osa and the gulf of San Lucar.

FIRST STAGES OF THE CONQUEST

The process of the conquest and de-structuring of our country’s native societies and Indian Chieftains in the XVI and XVII centuries is immersed in what is known as the first and second stage of the conquest of the province of Costa Rica.

The first stage begins in 1522. with the expedition mounted by Andre’s Niño and Gil Gonzalez Dávila, who did not venture into the interior of the province. Niño traveled through the Pacific seaboard from Burica to Caldera, later directing his steps towards Nicaragua. González Dávila, by land, and leading one hundred men traveled the country’s South Eastern coast to the village of Abancari in the present canton of Puntarenas. He also visited Caldera and the Nicoya Peninsula, Diriá (in Santa Cruz) and also continued on to Nicaragua.

This first stage is characterized by brief contacts with the natives of the area. In 1524, Francisco de Cárdoba founded Villa Bruselas, in the East Coast of the Gulf of Nicoya. This was the first settlement founded by the Spaniards in Costa Rica.

In 1540, The Spanish King Carlos V granted the title of Governor of the Province of Cartago and Costa Rica to the conqueror Diego de Gutierrez. Three years later, he founded the hamlet of Villa Santiago, near the mouth of the river Suerre (today Pacuare).

In 1544, Diego de Gutierrez founded the city of San Francisco, thirty kilometers inland from the first settlement. However, his death that same year, ended in the dismembering of those settlements.

SECOND STAGE OF THE CONQUEST

It won’t be till 1561 that the Spaniards penetrate the interior of the province. Juan de Cavallón and the priest Juan de Estrada Rávago started the conquest anew. Father Estrada founded the Villa Castillo de Austria, in the mouth of the mouth of river Suerre, but he could not keep the position due to the interference of the natives. He then returned to Nicaragua.

Juan de Cavallón began his conquest through what is today the province of Guanacaste. Accompanied by 90 Spanish soldiers and some African slaves, he entered the territory bringing with him cattle and seeds and ready to colonize and make peace in the area. Thus, he became the first to found, on March 1561, a settlement in the Central Valley. This he called the City of Garcimuñoz.

In 1562. a new governor was named, Juan Vázquez de Coronado, who followed Cavallón’s route. He penetrated the region following Cavallón’s path, to the point that he transferred the city of Garcimuñoz to the Valle del Guarco and changed its name to Cartago. In spite of this, this hamlet was short lived.

The belated conquest and colonization of the Central Valley (1561) made it possible, during the colonial period, for practically the entire territory of the Province of Costa Rica to be under the jurisdiction of the Town Council («Cabildo») de Cartago, which, together with the figure of the governor, monopolized the political, economic, social and cultural control of the Province. For the establishment of Indian villages, «corregidores» were named. These were charged with keeping the natives in groups and making them comply with their assigned functions. For the administration of justice, Mayors were also named in the Indian villages. These positions were usually held by the «caciques». Also, a catechist priest kept a strict religious and socio-economic control in these settlements. In 1601, a mule path was opened between Costa Rica and Panamá.

Likewise, another less conciliatory practices were carried out. With the naming of Perafdn de Rivera as governor, the parceling out of natives and the payment of tributes (taxes) by the Indians to the Spaniard in charge: «encomendero» («encomienda de tributo») were established in 1569. It must be kept in mind that before 1542. «encomienda» was synonymous with enslavement, but after that day, with the new Laws of Fray Bartolome de las Casas («Leyes Nuevas de Fray Bartolome de las Casas»), the concept of «encomienda» became associated with service. The Indian, then, worked for the Spaniards. After 1550. the «encomienda» as tax «encomienda de tributo» was established.

Rivera moves the city of Cartago to the area known as Mata Redonda. And with Perafán de Rivera, the cycle of the conquerors comes to a close.

In 1574, Don Alonso de Anguciana de Gamboa was appointed Interim Governor and he moved the city of Cartago for the third time. This time, it went from Mata Redonda to the Valley of Guarco, and this time the move was definitive. Towards the end of the XVI century, motivated by land distributions, many of Cartago’s dwellers migrated West to Ochomogo. thus populating the Valley of Aserrí.

During the XVII and XVIII centuries, the colonization of the Province of Costa Rica continued to increase, but very slowly. This was due to the scarcity of cheap native labor, which did not make this province very attractive for commerce. It is a fact that Costa Rica was quite poor and a territory where the Spaniards had to produce their own food. The only source of commerce was tobacco, and given the scarcity of coins, cacao seeds were used instead for the purpose.

Towards the end of the XVIII century, the first coffee seeds were brought to the country, a product that would achieve great importance in the coming century.

INDEPENDENCE AND THE STRUCTURING OF THE COSTA RICAN STATE

The peoples of the Province of Costa Rica, who had elected their first Town Councils («Cabildos») in 1812 and 1813, would see them abolished with the return to the Spanish Throne of Fernando VII, in 1814.

In 1814, Fernando VII, also called «The Desired One» («El Deseado»), returned to Spain after the expulsion of the French. He abolished the Cadiz constitution of 1812, which, among other things, had convened the formation of the «Cabildos». With this act, Fernando began an absolutist reign eliminating the Spanish-American Town Councils.

Since Spain reestablished constitutional order when General Riego defeated the Kings followers and forced the King to swear the Constitution, in July 30, 1820, Costa Rica swore the Gaditana Constitution of 1812, for the second time.

Around those years, due to world events that had their repercussion in the Americas, and due to the continental nature of the liberation struggles, Guatemala declared its independence, at the same time urging the people of the other sister provinces to do the same. The copy of the Independence Declaration of September 15, 1821, arrived in Costa Rica on October 13 of the same year.

Notice was received of the sending of a printed official document, a declaration by the Captain General of Guatemala and an official document by the Political Chief of León, all accompanying an edict from the most excellent Provincial Delegation; all of which referred to the independence from Spain.

In the Town Councils of San Jose and Cartago. in their official minutes of the 14th and the 17th of October, and on the basis of the news contained in the mail received on the thirteenth of said month, the «opportune idea» arose of organizing a meeting of commissioners to promote order, peace and security, while the clouds of the day dissipated and a new way of life or a system of government that was convenient to adopt were defined. The object of the Meeting of Legates was to appoint an interim Governing Assembly that would substitute the Spanish Governor don Juan Manuel de Cañas.

At the invitation of the Cartago Town Council, all the Councils had to send their delegates to that city on the 25th of October, «but it so happened that due to the shortness of time, the difficulties in communications, or the ignorance of the proper proceedings to name such representatives, part of the Councils did not comply».

In the city of Cartago, on the 25th of October of the year 1821, a group of Legates from the Town Councils of the villages of Costa Rica, presented their credentials before the Cartago Town Council and proceeded to install a Board of Legates, thus forming the First Provisional Government of Costa Rica.

The propaganda mounted by the Cartago Town Council was active in promoting that «to gather the Legates, it was respected and attended by the rest, and that it was truly a common center for all, and the one that, without declaration or opposition of any kind, would assume the Government in this acephalous situation». This meeting resulted in the inauguration, on November 12, of the First Interim Superior Governing Assembly.

The Interim Fundamental Social Pact of Costa Rica («Pacto de la Concordia») known in session 17, was first signed on December of 1821 and it was made up of 58 articles and seven chapters, to wit: of the Province, of the Religion, of the Citizens, of the Government, of the election of Government, of the installation of the Assembly and its Faculties, of the restriction of the Government.

On the 3 of March of the year 1823, in the Most Noble and Most Loyal City of Cartago («La Muy Noble y Muy Leal Ciudad de Cartago»), the Provincial Assembly was installed.

On May 16, 1823, the second Political Statute of the Province of Costa Rica was signed.